Kingdom of Saudi Arabia is looking forward to introduce "Green Card" program for expatriates, which will be in place in 5 years, It is similar to United States Green Card system. This system may allow expatriates to get permanent residence in Saudi.


This surprising news was from Deputy Crown Prince Mohammad Bin Salman Al Saudi while having interview with Bloomberg. This System will help the kingdom to generate new revenues for the national economy as part of improving non oil revenue. Its a large package of programs that will restructure revenue generating sectors. Recommended :  Saudi Arabia Jawazat

- It will allow expatriates to invest in the Kingdom of Saudi Arabia.


- Saudi Green Card will allow Muslims and Arabs to remain for long time in the Kingdom of Saudi Arabia.

- It may also possible the current kafala system will be abolished if this system implemented. Similar : Check Sponsor ID


- This system may allow expatriates to own the property in Saudi Arabia like real estate, trade, industry and firms. Read Also : Expatriates Population

Green Card System is currently under study by the government of Saudi Arabia, So, It will be implement in the next five years.

Green Card in United States allows expatriates to live and work permanently in US, It is valid for 10 years and it is renewable, It is a path of gaining citizenship. You may also like : Muqeem for New Expats 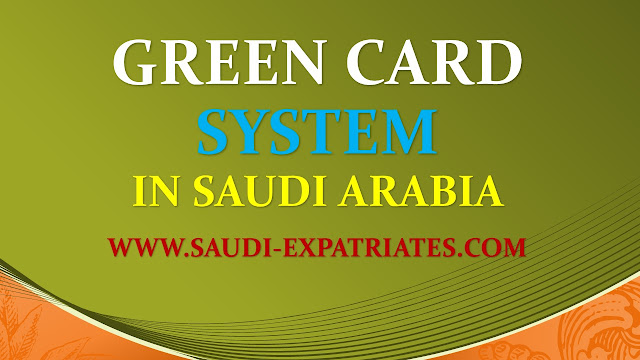