Biometric FingerPrint must for Expats & Children above 6 Years

Posted by : Aahil Shaik Friday, December 13, 2019
Biometric FingerPrint must for 6 Years & above Children of Expats

The Passport Department in Saudi Arabia has implemented a must rule on Biometric Fingerprint enrollment for expatriates who are living with their families in the Kingdom. Those who failed to register their fingerprints, the services will be suspended for them and their dependents.


Saudi Expatriates families whose children are of age 6 years or above 6 years, Must enroll their children biometric finger prints in Passport Department urgently. Failing in registering finger prints of their children will result in stop the services related to that expatriate family. Recommended : Family Iqama Procedure


Earlier it was mandatory for the expatriate children whose age is above 15, Now it made mandatory for six years old or above six years old children. It was an announcement from passport department of Saudi Arabia www.gdp.gov.sa . Recommended : Fingerprint Enrollment Status


- Expatriates can visit any of Passport Department for registration of their children finger prints. You can also visit nearest Self Service registration stations and activation machines at your place.

Biometric fingerprint was started first in November 2014 for women, who are going on exit re entry visa's then it became compulsory for women and children above 15 in the beginning of January 2015 and now it is must for 6 years and above kids. Recommended : Family Exit Re Entry Visa 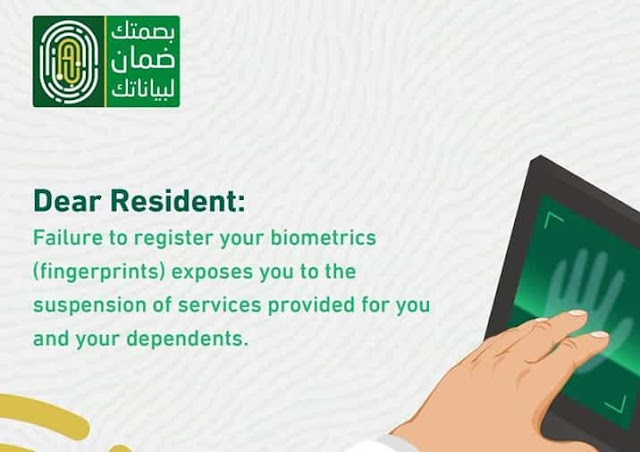