2. Guides and awareness signs must be placed in all areas and written in various languages including corona infection warnings, hand washing protocols, sneezing and coughing etiquette and the use of alcohol hand sanitizers.

3. The protocols prohibited "sharing personal tools and equipment between the pilgrims, and specifying the number of people allowed to use elevators, in order to ensure the preservation of the recommended social spacing distances, and the need to use signs, so that they include a distance of one and a half meters between individuals in the escalators or the normal stairs."


4. The protocols stressed, Sticking to periodic cleansing of environmental surfaces, with a focus on places where contact is most likely, especially (reception points, seating seats, waiting areas, as well as door and dining tables handles, seat rests, and removing dirt with soap and water before each operation) disinfection".

5. The controls pointed to "disinfecting the hands and placing them in prominent places and in the areas of assembly, corridors and restrooms, and ensuring good ventilation in the places of the pilgrims and workers", as well as "the presence of trash and waste baskets, and they should be of the type that works without the need to touch, and must be disposed of Waste on an ongoing basis, placing hand disinfectants and instructional boards for hand disinfection next to interactive devices such as query screens, ATMs and self-selling machines.

6. The controls allowed "congregational prayer, with an emphasis on wearing a cloth muzzle, keeping a distance between worshipers and referring to protocols for mosques."


7. The controls allowed "congregational prayer, with an emphasis on wearing a cloth muzzle, keeping a distance between worshipers and referring to protocols for mosques."

8. In the matter of residential buildings, the regulations emphasized the employees to wear masks during work, including reception stations, and before entering the guest rooms. Inmates should also “wear masks when outside the rooms, and commit to cleansing environmental surfaces on a regular basis with a focus on places that There is a great deal of contact potential, especially during the day, such as the reception station and waiting areas, as well as door handles, dining tables, seat rests, elevator keys, etc. »

9. providing drinking water and Zamzam water in containers intended for individuals and for single use, with all refrigerators removed or disabled in the Holy Mosque and holy sites, provided that meals are limited to pre-prepared and packaged foods, to be provided individually for each pilgrim Separately".


10. Also, alcohol hand disinfectants should be provided in any place designated for serving food in a clear and easily accessible sight, and ensure that workers wash hands routinely and repeatedly for forty seconds at least every time during work shifts; Either using water or using an alcohol-based hand sanitizer for a period of no less than twenty seconds in the event that soap and water are not available.

11. Regarding bus controls, the controls indicated, "Determining a bus for each group, a seat number assigned to the same pilgrim during the entire Hajj trip, commitment to the same seat for all pilgrims throughout the flight, and not allowing pilgrims to park inside the bus."

12. Drivers and all passengers must wear cloth masks or nose and mouth covers at all times while on the bus, and drivers must avoid contact with passengers.

14. Saloon workers must use single-use protective neck straps and place them around the pilgrim’s neck when cutting hair. Also, tools used after each pilgrim, such as “gloves, shear robe, etc.” should be disposed of in a closed container.

15. New shaving and cutting tools must be used for every pilgrim, such as combs, razors, etc., and controls are advised to provide service to the pilgrim by the group's operator and prevent the worker from moving between groups, cleaning and disinfecting the shaving chair, especially the armrest, as well as shaving tools such as combs, brushes, and tool carts.

With regard to Arafat and Muzdalifah, the controls emphasized:

Commitment to stay in designated places and not to deviate from the designated route by the organizer.

Stressing commitment to wearing masks at all times for pilgrims while performing the ritual.


Food provided during the performance of these rituals should be limited to the pre-packaged only.

Pilgrims are distributed to the tents so that they number no more than 10 pilgrims per 50 square meters of tent area, while maintaining a distance of at least 1.5 meters between each pilgrim and the other from all sides.

Preventing overcrowding in public baths and ablution washbasins by placing floor stickers or disrupting the use of a number of baths or washbasins, so as to ensure a safe distance of one and a half meters between each person.

Providing pilgrims with stones that are pre-sterilized and placed or wrapped in sealed bags by the organizer.


The pilgrims ’entitlement to the Jamarat facility should be scheduled so that the number of pilgrims who throw stones at the same time does not exceed one group“ fifty pilgrims ”for each role of the Jamarat facility, or to ensure a distance of one and a half meters to at least two meters between each person and the other while performing a throwing rite Jamarat.

Provide adequate masks and sterilization materials for all pilgrims and workers on the path of the stoning trip.

With regard to the Great Mosque of Mecca:

The pilgrims must be entrusted to the Tawaf courtyard, ensuring a distance of one and a half meters at least between each person and the other, and reducing crowding, along with organizers of men to ensure that the two sects are organized. 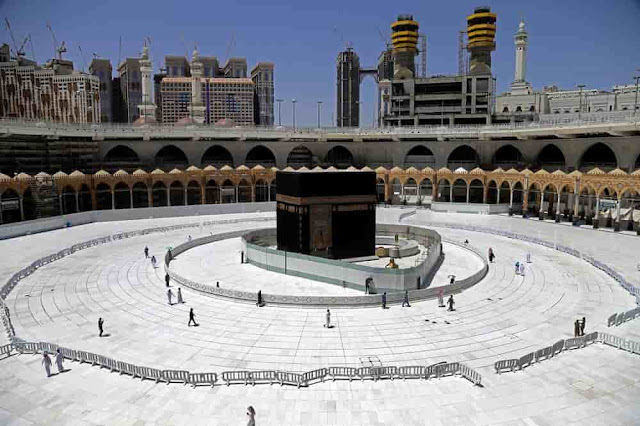