The Interior Ministry in Saudi Arabia amended mosques protocols in addition to what was announced earlier of imposing precautionary and preventive measures for several sectors.


The following are the amended protocols of Mosques :

1. Opening the mosques 30 minutes before the obligatory prayer and closing it 30 minutes after the prayer.

2. Opening mosques 1 hour before Friday prayers and closing them after 30 minutes after prayer.

3. Calling the worshipers to keep a distance of one and half meters between each others from all sides.

4. Allowing the elderly and those suffering from chronic diseases to pray inside the mosque, while urging them to perform it at home.

5. Allowing lectures after prayer, while sticking to the procedures of social distance and consistent with the duration of mosque's opening.


6. Giving enough space on the outskirts of the mosque to allow the movement of worshipers exit from the first to the exits without the need to pass between the worshipers.

7. Distributing hand sanitizers in the mosques, if possible.

8. Make sure that the hand sanitizer contains 60 to 80% of alcohol and meets the requirement of the Food and Drug General Authority.

9. Distributing tissue papers in mosque and placing it in prominent places.

10. Remove books, Qurans if possible and worshipers can bring their own Qurans with them.

11. Remove dirt with soap and water before disinfection of surfaces.

12. Maintain a record of surfaces for disinfection.


13. Opening the toilets and ablution places in mosques.

14. Follow the disinfection manual issued by National Center for Disease Prevention and Control.

15. Ensure social space in toilets by placing wait signs and disabling washbasin between each washroom.

17. Wearing a medical or cloth mask and ablution at home and make sure not to crowd while leaving.

18. Worshipers must bring their carpet to pray at mosque.


19. Removing all water coolers, refrigerators and type of food and beverage in mosque.

21. It is preferable to have trash and waste baskets that work without touch and waste should be dispose continuously.

22. Monitoring the health status of those in charge of mosque by asking about symptoms and recording the temperature on a daily basis. 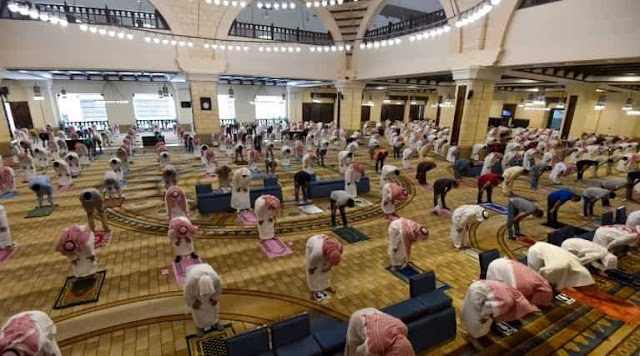