Saudi Arabia's Police are authorize to detect the listed violations and levy the fines on the violators of the Public Decency Code. Violators also need to pay the cost of repairing the damage resulting from their violations and infringments.


1. 3000 SR fine for first time on "Indecent behavior that includes act of sexual nature", Repeated violation will penalize you with 6000 Saudi Riyals.

2. 500 SR for first time on "Playing Music in High volume inside a residential area and a complaint is made by one or more residents, without obtaining a prior approval". Repeated violation will fine you with 1000 SR.

3. "Playing Music during prayer time" will penalize you with 1000 SR for the first time and 2000 SR for the 2nd time or repeated violation.


4. "Non-removal of pet feces by its owner", First time violation fine is 100 SR and 200 SR for the repeated violations.

5. "Littering in non designated areas and spitting" will penalize you with 500 SR for the first time, From second time onwards your fine will be doubled.

6. 200 SR fine for the first time on "Occupying the seats and facilities designated for the elderly and the disable persons", repeating it will cost you 400 SR.


7. "Bypassing barriers to access public areas" is a violation, it will cost you to pay 500 SR, in case of repetition 1000 SR should be paid.

8. SR 50 fine for not respecting queues and jumping lines on first time, second time it will be 100 SR.


10. The Sale, Purchase and Consumption of alcohol is prohibited in Saudi Arabia, It is illegal as per the Saudi Arabia law.

11. It is Prohibited to take photos or videos of others or traffic accidents or crimes or other incidents without permission. Fine for this violation is 1000 SR on 1st time, from 2nd times it will be 2000 SR.

12. Disposing of grabage at non designated areas or sites.

14. First time 100 SR, Repetition of violation penalize with 200 SR on "Any act of Physical or Verbal, that harm, frighten or endanger any individual in public place".

15. Placing or sticking commercial labels and distributing flyers in public places without approval, For the first time the fine is 100 SR from 2nd time its 200 SR.

17. 100 SR fine for first time on "Writing or Drawing or similar act on public transportation or walls without authorization", second time the fine will be 200 SR. 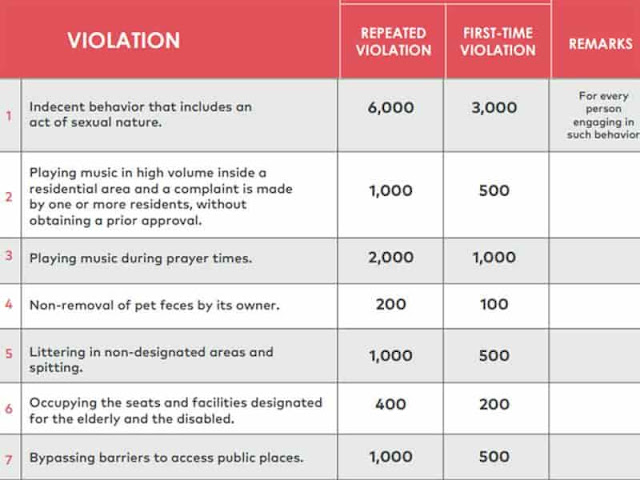