CROCODILE SEEN STROLLING ON THE STREETS OF SAUDI ARABIA

A viral video shows the unbelievable moment when a crocodile was spotted strolling near the streets of Riyadh, It was on the King Abdullah road in Howtat Bani Tamim area. Trending : A Saudi man burns sister's car in a viral video


The people in the area called authorities immediately and informed about the presence of a crocodile on the road. The police authorities arrived immediately and took the control over the reptile, which was crawling around calmly. Recommend : A Saudi man rented whole shopping mall for private shopping

- As per the Saudi local news, the crocodile was a part of a wild animal festival in the city, which happened few days ago. However this crocodile managed to escape from the festival and was roaming on the road.


- The caretakers of the reptile was reported about the missing of the crocodile. The people around the area capture the videos and uploaded on social media. In one of the video Saudi police officials was trying to capture it with a rope. See Also : Expat street cleaner touches hearts with his kind act

- Some people initially thought this crocodile is a pet and escaped a home, but the case was different here, while others expressed their shock at the incident. 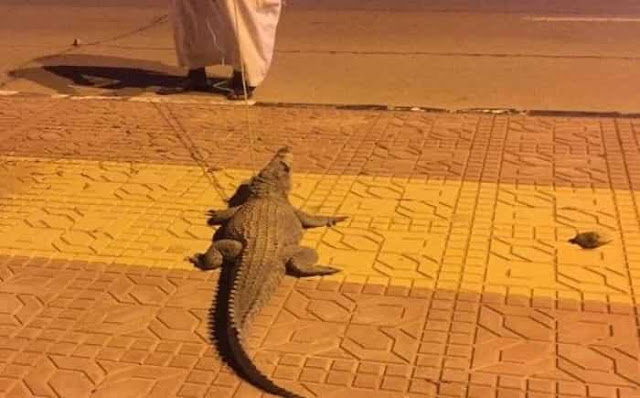