BALOOT IS A CARD GAME NOT GAMBLING

Posted by : Aahil Shaik Apr 9, 2018
BALOOT IS A SPORT CARD GAME IN SAUDI ARABIA ITS NOT GAMBLING

"Baloot" is an old Arabian card game which is similar to French card game called "Belote", It is kind of a sport game and quite popular with the people of Saudi Arabia. This game does not involve in gambling or bet money, So, wake up and stop spreading rumors. Trending : 4 women found palying card game in Makkah


From the last few days, It has been seen people blaming Saudi Arabia as it opened its first casino, This is not true. People need to understand that there are hundreds of card games which is not involving in gambling money. In most parts of the world, card games are like sports. Recommend : Saudi Arabia bans night wear dress in Public places

- Saudi Arabia has conducted its first maiden championship of 'Baloot' most popular card game, More than 85,000 people have registered for playing this game out of which 12,288 were selected to play on 384 tables for championship as per Saudi Gazette report.

- The event is organized with the full support of the Board Chairman of the General Sport Authority (GSA) and President of Saudi Arabian Olympic Committee with financial awards of 1 Million Saudi Riyals.

- As it is first time, The prize was huge for top 4 contestants. First prize is half million Saudi Riyals, Second prize is 250,000 SR, Third prize is 150,000 SR and the fourth prize is 100,000 Saudi Riyals. You May Also Like : Airport pickups banned for Careem and Uber in Saudi Arabia

- It is a game of mind skills and its an opportunity for both Saudi man and woman to show their skills in their leisure hours. Baloot is one of indoor game played by all age groups in Saudi Arabia. It is most common in youth where they gather and play Baloot in their free time.


- Baloot game is considered as a game of mind and intellectuals, It will help in developing IQ level, It is even played by woman in their homes. The game's origin is from France and then it got popularity in the Middle East, especially in Saudi Arabia and Kuwait. Most Viewed : No more expats allowed to work in Gold & Jewelry shops of Saudi Arabia

- Baloot is a game of 4 Players in partnership with 2 teams, All the cards of rank 6 and below will be removed including Jokers, The game will be played with 32 cards each player will get 8 cards in his hand. It is even available online an in many gaming portals and mobile apps. 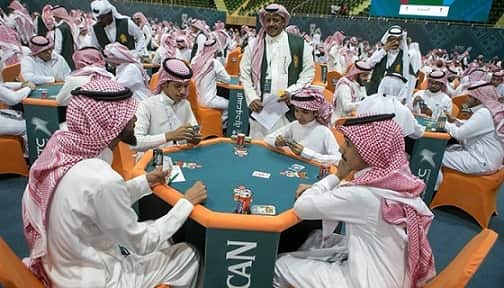