NO MORE EXPATS IN GOLD AND JEWELRY SHOPS

Saudi Arabia bans employment of expatriates in gold and jewelry shops as the process of nationalizing jobs moved ahead and reached the Kingdom's gold and jewelry industry said Ministry of Labor and Social development. Related : Fine on gold shops for employing expats

From now it is illegal to employ expats in the gold and jewelry sector, Saudi government had made several attempts earlier also in order to Saudize this industry jobs from the last 16 years. Recommend : Indians still prefer Saudi Arabia for jobs

- According to estimated reports, In this industry there are more than 30,000 expat workers are working in the 6000 gold shops of the Kingdom of Saudi Arabia.


- These move will bring 5000 jobs for Saudi nationals after it is fully implemented, The ministry is planning to reduce businesses running by foreigners in the name of Saudi citizens, which is nearly about 40 percent in Saudi Arabia now. Similar : Saudi tops in list of wasting food

- Ministry found most of the businesses in various cities including Makkah and Madina are operating on fake Saudization. The sector of gold and jewelry is unattractive to Saudis, Salaries in this sector ranged between 3000 Saudi Riyals to 7000 Saudi Riyals.

- Gold shops to be fined with 20,000 Saudi Riyals, If they found any expat starting from Sunday, Permanent inspectors will visit various malls and markets in order to penalize the violators. Read : Ban on photos and videos in Makkah & Madina

- However, Foreigners married to Saudi women will be exempt from this new rule if they are together or they have children.


- Saudi Arabia's gold market is to be estimated of worth 14 Billion Saudi Riyals. In the vision of Saudi 2030 all businesses to be fully Saudize as per ministry regulation. See Also : Saudi tourist visas open for all from 2018 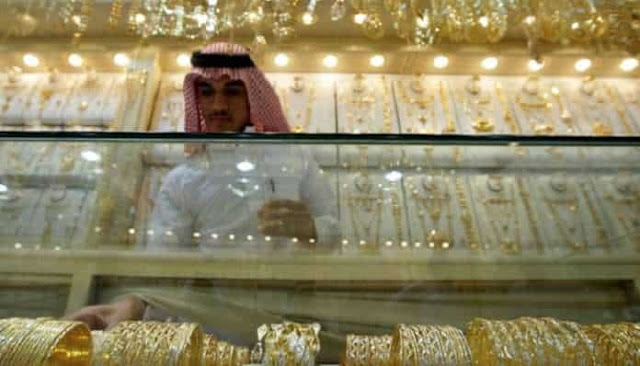