Ministry Of Interior is about to take action on those all people who are harming Islam, Saudi Arabia community and Saudi citizens by using social media networks. It has been seen some users in social media does not have any work except giving hard comments on Saudi Arabia and Islam. Recommend : No Royal is above law - Saudi King Salman


Interior Ministry will soon charge and arrest those users whose manner harms and deviate the Islam, Saudi community and Government. Repeated requests has been received from some citizens and expats to take action against those all account users. See Also : Latest rumors about Saudi Arabia

- Once you post any status or comment or any video on any social media network, It will no more personal, It is public not your property now. As It reaches to various kind of people on that network, Some may like it and some may not.

- Some people reported few peoples who are misusing Snap Chat and Twitter by posting disrespectful and harmful comments about Islam and Government. Riyadh police identified the persons and handed over to Bureau of Investigation. Reach to us on : Twitter


- A month before we seen Abu-Sin case, A Saudi boy who video chatted with a American girl, It was private till that. But when it posted on Youtube, Various people reported it as harming Saudi culture. Trending : How to transfer car ownership in KSA

- Police caught AbuSin and put him in jail, after 10 days he was released on bail, It is heard that he have a jail term of 3 years and need to pay some big amount as penalty.

- Riyadh police asked citizens and expatriates to report those all accounts who are posting harmful and disrespectful comments about Saudi Arabia or Government or Islam. Most Viewed : Nationality wise Saudi Visit Visa fee

- We kindly request to all social network users, Think twice before you comment or post any thing that relates to Saudi Arabia or Government or Islam, You may need to pay big for your small action or comment. Plus one us on : Google+ 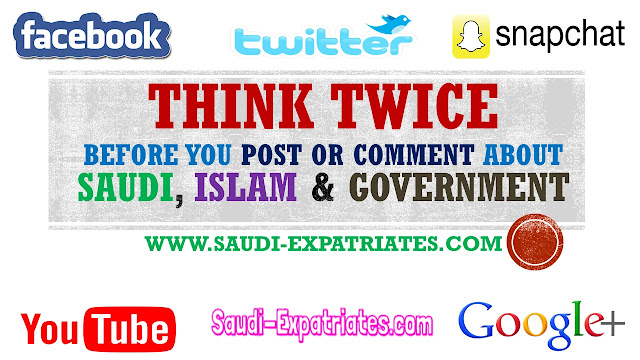