NO ROYAL OR MINISTER IS ABOVE LAW

Posted by : Aahil Shaik Oct 20, 2016
NO ROYAL OR MINISTER IS ABOVE LAW SAID SAUDI CROWN PRINCE

11 Princes, 4 sitting ministers and more than 10 former ministers were arrested immediately on the order of the new committee according to the Al Arabiya news, As per the committee they reopened 2009 Jeddah floods file and 2012 MERS issue.

- Custodian of the Two Holy Mosques King Salman said he or other members of the royal family are not above the law. Saudi Arabia is not in those countries where state heads or Kings have immune for skipping the legal charge on them. Most Shared : King Salman orders solve the issues of distress workers

Any citizen of Saudi Arabia can file a lawsuit on King or Crown Prince or the other members of the royal family. King Salman said once a citizen sued his father, King Abdul Aziz insisted to proceed with law and its course, Later the verdict was in the favor of King but all the rights of him were waived.


- A Saudi prince named 'Saud bin Abdulaziz bin Musaed bin Saud' was arrested for abusing Saudi citizen on car parking, when King Salman known about it, he ordered for immediate arrest of the prince and proceed with the legal law on him. People on social media lauds the King Salman on his justice and rule 'No royal is above law'. Most Viewed : Top Companies of Saudi Arabia


- Earlier we seen the execution of one of royal young prince 'Prince Turki Bin Saud Bin Turki Bin Saud Al-Kabir' in Riyadh. As per the Ministry Of Interior statement, He shot one of his fellow citizen in a mass quarrel.

- After several investigations he charged with murder, The General Court sentenced him to death with the support of Court of Appeals, Supreme Court and the royal decree to carry out the ruling from King Salman. New Topic : Ministries of Saudi Arabia

- It is a stronger message to all the younger royals that no royals are above law, The executed prince was a distant cousin of the King Salman.


- Citizens who point out the mistakes of the King or members of the government or community will be rewarded by Allah. Public can lodge complaints either face to face or by writing or by telephone. Trending : King Salman orders cut the salaries of government

- Our constitution is the holy Quran, the Sunnah of Allah's Messenger and the examples of the Khalifs. Alhamdulillah! Our country is secure and stable.


- The pride and strength of Saudi Arabia is the Makkah and the revelation received by Mohammed (Peace Be Upon Him). Therefore we have a big responsibility in the entire world. Related : Islamic New Year 1438 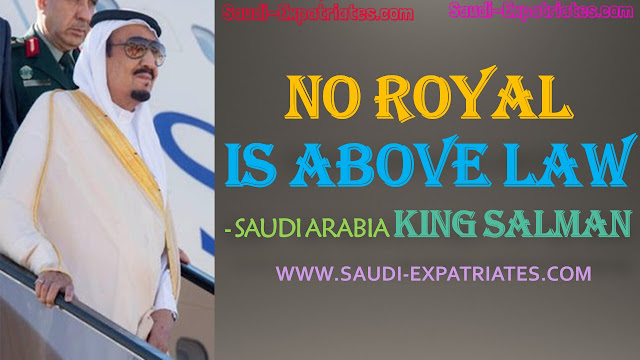