Saudi Arabia Customs has set the limit of currency to 60,000 SAR (Saudi Arabian Riyal) for carrying out (Export) of the Kingdom or bringing inside (Import) the Kingdom through airport. Exceeding the amount of SR 60,000 should be declare.


Travelers or passengers carrying more than sixty thousand Saudi riyals (or equivalent amount) from or to other countries currencies must be declared, In case of failed to declare and caught, you may need to pay a penalty with a jail term and it will be treated as the crime of money laundering. Recommended : Bank ATM withdrawal limit

- Israeli Shekel is not included in the other currencies as it is prohibited in the Kingdom of Saudi Arabia, passenger who traveled to Israel earlier is not welcomed in the Saudi Arab. Similar : New labour law in Saudi Arabia


- These limit of 60,000 riyals is not only on cash, it also includes valuable metals, jewelry, diamonds, etc,. the passenger is carrying or bringing. Related : Domestic flights in riyadh airport

- However, one should care, where he is taking this amount as the other countries where you are going have their own rules and regulations of customs for carrying or bringing money or any valuable metals through their airports. 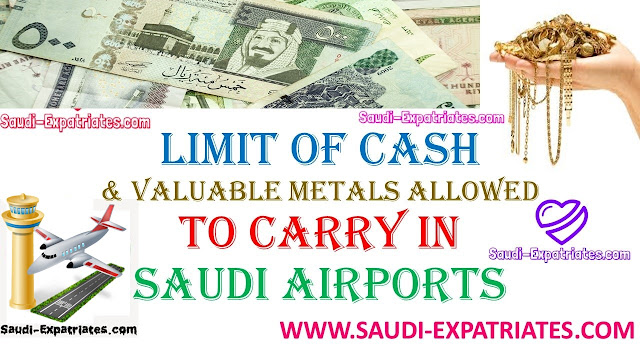 - It will prohibit some extra smart people who will carry the amount in hand. instead of remitting money through remittance center or bank just to save the remit fee. It is always recommended to remit money in your bank if you have more than 60,000. See Also : International flight delay compensation


- It is mandatory to mention in customs form of the country, if you are traveling with more than the allowed cash or equivalent amount of valuable things or ornaments . You May Like : International Airport in Saudi Arabia


- This limit is not only in Saudi Arabia customs, Every country customs have its own rules and regulations on the airports. They have a right to check your baggage any time.